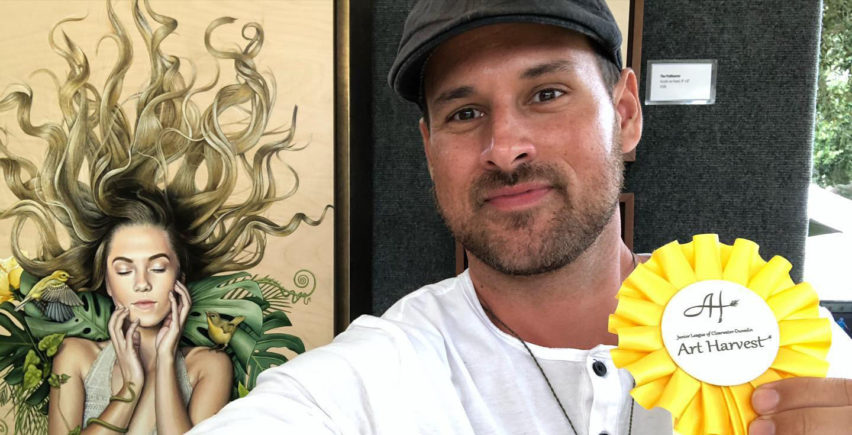 Nathan Miller’s artist journey began as a child. He enjoyed drawing animals, people, dragons and dinosaurs. The future Tampa and St. Pete artist was always known as the artist in the classroom. At the age of 15, he moved to Jerusalem, Israel, because of his father’s work. During his high school years, Nathan traveled to Kenya and Uganda, which would influence his art for years to come.

Midway through his senior year, Nathan returned to the U.S., where his family settled in Gainesville, Florida. After finishing his final semester at Buchholz High School, he enrolled at the University of Florida where he received a Bachelor of Fine Arts in Graphic Design. After graduating, he accepted a Web Design position in Houston, Texas. Nathan Miller enjoyed life as a young professional in a large city with many other young professionals. But, after five years, he was ready for something new.

Nathan felt as though a part of him was being neglected. Although he was at home in the city and enjoyed his work environment, he knew he had to paint. Web Design was a job, but painting was a passion. And because he enjoyed surfing and exploring the outdoors, Costa Rica called him. The future Tampa Bay artist sold his belongings, stocked up on art supplies, and began the next chapter in his life.

For the next five years, Nathan dove into his art from the small town of Nosara, Costa Rica. He left web design and did everything he could to learn, grow, and evolve as an artist. The lifestyle was more laid back. It was exactly what he needed to focus on his work. It wasn’t long before Nathan became known throughout Costa Rica. He won first place in a national art contest and then became one of the most prominent artists featured at the Hidden Garden Gallery in Liberia, Costa Rica. He built a business specializing in giclée prints on stretched canvas, and eventually spent most of his time focused on commissioned paintings of wildlife and portraiture.

To be immersed in a culture of art and to take his work to the next level, Nathan Miller chose to return to the United States, where he has studio space in St. Petersburg, Florida, a city known for its vibrant art scene. Since his move, Nathan has won a number of awards at art festivals, including the Friends of the Museum Award at the Gasparilla Festival of the Arts in 2019.

Currently, Nathan Miller is known both as a portrait and wildlife artist. His original and commissioned paintings, as well as his giclee prints, have reached all corners of the globe. Today, Nathan resides in Tampa, but he continues to maintains studio space in St. Pete.

***This just in! You can now purchase Nathan Miller’s art on Etsy***

Friends of the Museum Award – 2019 Gasparilla Festival of the Arts

Award of Excellence – 2019 Manatee Festival of the Arts