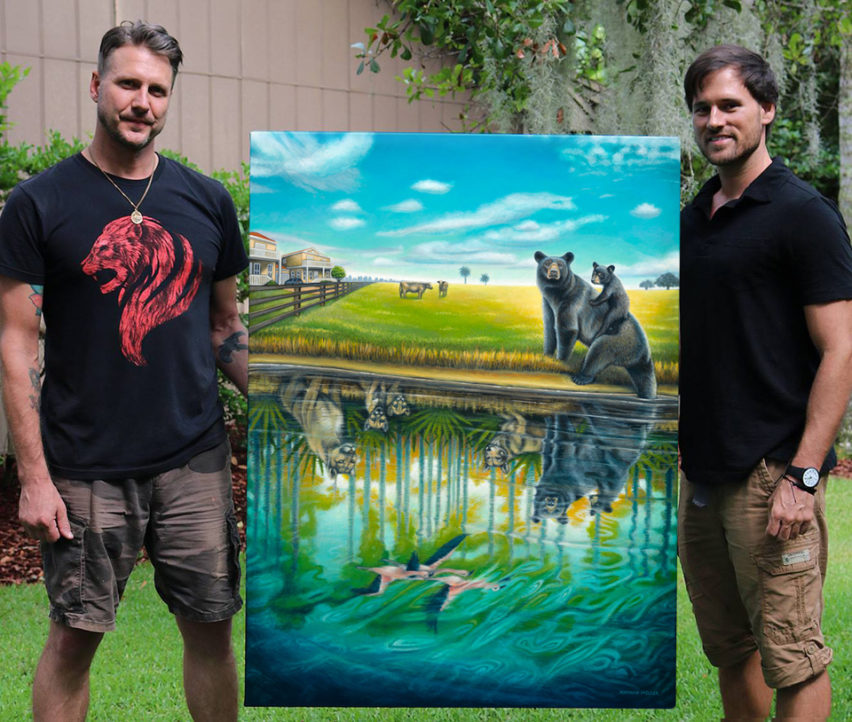 Reflection, a painting depicting the Florida Black Bear and its disappearing habitat, was commissioned by Adam Sugalski, founder of One Protest. Adam is the man leading the fight against the proposed Florida Black Bear Hunt. Adam and I met through Facebook a year ago when we got the news that the Florida Fish and Wildlife Conservation Commission was considering open season on a species that, for the first time in twenty years, was no longer considered endangered. Being concerned for the bears, I read as much as I could about their status in the state of Florida. I learned that there were only around 3,000 in the entire state. I also learned that there were at least 1.3 MILLION alligators and HUNDREDS OF THOUSANDS of deer. And, of course, there were nearly 20 MILLION of us. How could a state with 20 MILLION people, well over a MILLION alligators and HUNDREDS OF THOUSANDS of deer not be able to tolerate the existence of approximately 3,000 bears? It just didn’t make sense. We had to save the Florida black bears.

The Start of a Movement

After contemplating the numbers of humans, alligators, deer and bears, I made this graphic…

The graphic spread quickly. And that’s how I met Adam. He created the Stop the Florida Bear Hunt Facebook page, and he asked if he could share it. Nearly a year later Adam would come up with the idea to auction a painting to help raise money to fight against future bear hunts. We could also use the money to educate the public about ways to coexist with bears.

We didn’t win the fight against the bear hunt in 2015, but likeminded people were united throughout the state. Opposition to the hunt grew, and in 2016, when another hunt was on the table, we won! The bears’ lives were spared and the will of the people was heard. But the fight’s not over. The FWC will propose future hunts. The bear’s home will continue to be encroached upon. Florida’s habitat and wildlife will need people to fight on their behalf.

When I began to think about what I wanted to say in this painting, I knew I had to address the underlying issue of habitat loss. I wanted to address how, when I look out at farmland or development, I think about the forest that once stood in its place. Florida is naturally lush and beautiful, but that rich biodiversity is being cleared on a daily basis. We will continue to fight against the hunting of bears, but, ultimately, if we’re going to save them, then we have to save their habitat. If we continue to clear the forests and fracture Florida’s wildlife corridors, the bears will be even more isolated, and calls to hunt them will strengthen. Because 50% of the state is considered habitable for bears, there is still plenty of space for them to roam, even with more recent projections of a bear population of just over 4,000. But as that space disappears so will our ability to prevent future hunts.

As I reflected on Florida’s disappearing habitat, I came up with the idea to feature what Florida is becoming and a reflection of what Florida once was. I decided to feature some of the species that have either gone extinct in Florida or are on the brink. The Florida Panther numbers around 200, the Flamingo is rarely seen, and the Red Wolf is extinct in the state, with just 50 left in the wild in North Carolina. The painting features a reflection of Florida’s disappearing wildlife and forests, leaving the Florida Black Bear in a vulnerable position. I wanted to make the statement that we are not the only ones who have a right to exist. Our way of life should not depend on the destruction of all other life. Collectively, we have to change our habits in order to save our habitat. And we have to act quickly.

The Painting is for Sale

Reflection, a large 36″ x 48″ acrylic painting on canvas is for sale and proceeds will go directly to the effort to save the Florida Black Bears and keep more animals from being mistreated. Prints of this piece are also available.

Thank you for taking the time to read this post and for joining the fight to protect Florida’s bears. Everyone’s voice matters.

Above: Adam Sugalski and Nathan Miller holding a paper print of Reflection.

Above: Adam Sugalski and Nathan Miller holding the Original Painting.*UPDATE! We managed to stop the Florida Black Bear Hunt for another two years! A hunt won’t be on the table again until 2019! If you are interested in the painting of Reflection feel free to contact me.

Explore more Blog Posts by Nathan Miller, check out his Portfolio or visit his Online Shop.

Posted on: November 11, 2019December 3, 2019
Author: Nathan Miller
Leave a comment on Reflection – We Must Save the Florida Black Bears